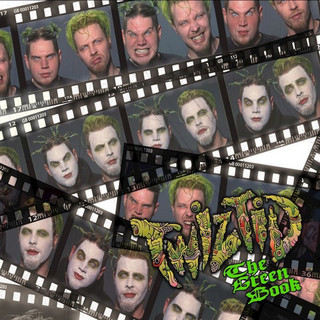 Speculation has it, that I'm the freakiest one
I like to rip out my tongue and spit the black magic
And I'm supposed to be fucking some crack addict without a rubber?
And I already got a baby by her mother?
They say I'm a sci-fi wizard of sorts
And my momma, she was a banshee, she was drowned by the courts
They say my little brother Jamie, he's dead and in a grave, and I'm all alone and afraid
And everything I gave has been so underestimated, I've been hated by generations
For having conversations with people who didn't make it
How could I fake it?
I'm a monster, remember me? The weirdo with the axe, from another galaxy
I keep a blender in my kitchen filled to rim with the blood
And spit suspicions of me drinking it up
So it's fucked, scatter stones, get out my cool-Aid
I'm blasting away from all you haters
Hit me up on my two-way
Besides some bullshit falling down
I'm okay
Speculation has it that I'm a drunk and a drug addict
A shit talker, always trying to start static
A borderline faggot, with long fingernails
Either that or he's a coke head, but I don't think he cares
Speculation has it that I have already engaged in sexually fantasies with me and Gwen Stefani
A video taping, internet downloads
Speculations is called is the one who gets boned
I can't escape it, mistake it, or fake it out
Look you in the face as if I don't know what you talking about
Speculation, you heard I don't spit on no bodies shit, but no, don't hate me
Many mouths to feed, and many personalities, and me looking to get P.A.I.D
Is it a lie or is it true?
You can put that on our skills they stay snug like my Batman suit
Smash the flash I have the plastic backing
Speculation, hateration, me and Twiztid don't give a
Mistaking, papered up, smashing independently
With a dedicated ass fanbase, and don't a mothafucka hear from me
Speculation, see they just don't know
I be rapping too fast, they be listening too slow
I be spitting sluggish
E-40 be spitting thuggish
E-40 be representing the bottery up in the cop, got the dirt popping
Ain't no stopping a pimp
Walk with a limp
Elbows on bimp
Flopping on hips
Sipping on sip, sipping on sip
Dipping and skating and bounce to this shit
Me and Twiztid be twisted
Me and Twiztid be gone
Me and Twiztid be blisted
Me and Twiztid be stoned
Gone on our head, dead, dead wrong
Smoking turtle, beating on our chest like King Kong
Conversating acting and poking, that's how it's hanging today
Trying to persuade this liquor into giving me brain