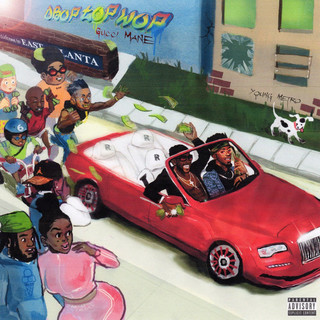 I'm a ex con, used to sell crack at the Texaco
Known for toting guns and it's what I'm on probation for
Had a murder charge, but they ain't found me guilty though

Keep my head on a swivel, 'cause I robbed a couple folks
And you can call me anything, but you can't call me broke, though

Was damn near 300 pounds, but I lost the weight, though

300 pounds of mid-grade, I took it 'cross the state, though
Got a bunch of tattoos, don't ask my why I got them, though
Got a lot of loved ones, but they ain't here today, though
Really miss my homeboy, he in a early grave, though
Gucci Mane a troublemaker, I'm trying to behave, though
Niggas keep on trying me, I think they feelin' brave, though
People say they cloned me because I changed my ways, though

I fly the dope in on a drone for the pesos
All about the bucks bro, but this ain't Tampa Bay, though

I'm a livin' legend, I do magic with the draco
In the Peach State, but I'm sellin' Cali grapes, though
And Arizona mid-grade, I swear my life is great, bro
Gucci Mane and Metro, exclusive Jordan retro
I was sellin' half a O trappin' at the Zesto

Aye wassup bruh, ride with me somewhere (Yo)
Yeah, I told the nigga "Meet me at the Zesto" (Dope)
He want a half of one (Go)

Gucci super cutthroat, but I was born broke though
Didn't have a pot to piss, so I wanted to throw it out, so
Niggas talk sideways, I hit him in his mouth though
Who you think you talking to? I had to stomp your mouth, bro
Baby got a pretty face but I just want the mouth though
You ain't come to suck me up, then what you in the house for?

Brand new Air Max and they ain't even out though
Drippin' sauce excessively and it ain't even called for
If the jewelry ain't blindin' me, then what it even about for?
Niggas want to sign to me, but I can't even vouch for
Back to back with Ralo, and we ain't even deep though
How yo clique compare to mines and y'all ain't even street though?