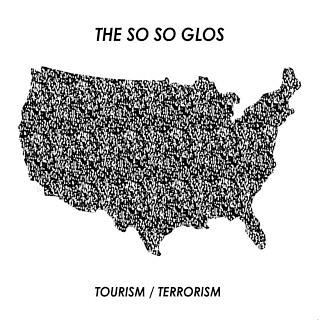 The So So Glos

The press is out
Yeah, they think we're dressed in blue and brown
They think we're sent straight from London Town
But we're not, and it's twenty-oh-eight
But it's the same routine
It's been the same since 19-80
The rich kids' in the hungry neighborhoods
Are looking for something to eat

There's a handful of kids on my block, they're crying
They all tell me New York City is dying

Oh, with the flick of her hand
She went and took it to another land
She said, "I can't stand your command"
He said, "okay, but remember this
I'll be your 30-second clip
Advertised on the coffee you sip
Driving by on a fast food strip
From Brooklyn to Baghdad and you paid for it"

And the man at the corner sells sex and violence
He don't look you in the face, but you could just sense it in his eyelids
And the whole world's a stage
But down in the crowd it's just a cage paying minimum wage
And it takes a wrecking ball to break the chain
Or so they say
Get up on your feet

There's a handful of kids on your block, they're styling
And they'll have you convinced that your whole wide world's an island
And that it really don't matter much
As long as you get that bang for your buck
And you put off today, tomorrow you're fucked

Oh, you got your prime, stepping in time in the supper line
And what you learned in the street was the same as in class
You gotta eat the weak to advance
And that sooner or later it is historically proven
The world's only equator will be left likely in ruin
So you should take what you can from the day
And at the end of it they'll have you lay
Beside that restless, restless feeling
When you're down on the ground and your head's gone through the ceiling