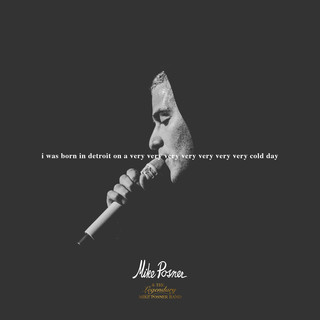 Here's to sixty-six shows
In three continents
In three months
Here's to playing your hearts out in each one of 'em we never half-assed it once
Here's to the roadies and the riggers
Build the stage and the lights every day
And when me, Nic and Demi are done being cool tonight in about two hours
They're gonna pack all this shit up and take it away

Here's to Kane and Batrell
Here's to Andre and Zac
For making us lookand sound good on the stage and also in our packs
Here's to Rob Dougan he never turns off
Here's to super Matt, his last tour, his farewell tour
I think in Massachusetts he'll find what he's looking for
Here's to the songs, where do they come from?
Nobody knows
Here's to the groupies, making us feel less alone after the shows
Here's to the audiences
When you add 'emup, this summer we played for five hundred and twelve thousand people, that's over half a million fans
And most of all, hee's to the immaculate, the impalpable, The Legendary Mike Posner Band
Heres's to Jimmy, ere's to Nate, here's to Kev, here's to Ben on the keys
And of course, Cali's own, hahahaha, the amazing Jacob Scesney

Of course, things could go wrong
My next album might not hit
Maybe I start drinking too much and it all falls to shit
But I don't think so
In fact, next year I think I'll be right here
Here's to the future, now
Here's to us, cheers