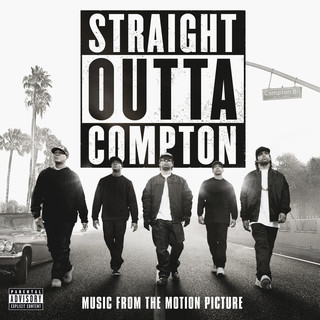 Fuck the police coming straight from the underground

A young nigga got it bad cause I'm brown

And not the other color so police think

They have the authority to kill a minority

Fuck that shit, cause I ain't the one

For a punk motherfucker with a badge and a gun

To be beating on, and thrown in jail

Fucking with me cause I'm a teenager

With a little bit of gold and a pager

Searching my car, looking for the product

Thinking every nigga is selling narcotics

You'd rather see, me in the pen

Than me and Lorenzo rolling in a Benz-o

Beat a police out of shape

And when I'm finished,
bring the yellow tape

To tape off the scene of the slaughter

Still getting swoll off bread and water

I don't know if they fags or what

Search a nigga down,
and grabbing his nuts

And on the other hand,
without a gun they can't get none

But don't let it be a black and a white one

Cause they'll slam ya down to the street top

Black police showing out for the white cop

On any motherfucker in a blue uniform

Just cause I'm from the CPT

Punk police are afraid of me, huh

A young nigga on the warpath

And when I'm finished,
it's gonna be a bloodbath

Of cops, dying in L.A

Yo Dre, I got something to say

Aww shit, now what the fuck you pullin me over for?

MC Ren, will you please give your testimony

To the jury about this fucked up incident?

Fuck the police and Ren said it with authority

Because the niggas on the street is a majority

A gang is with whoever I'm stepping

And the motherfucking weapon is kept in

A stash box, for the so-called law

Wishing Ren was a nigga that they never saw

Lights start flashing behind me

But that shit don't work, I just laugh

Reading my rights and shit, it's all junk

Pulling out a silly club, so you stand

With a fake-ass badge and a gun in your hand

But take off the gun so you can see what's up

But drop your gat, and Ren's gonna blast

I'm sneaky as fuck when it comes to crime

But I'ma smoke them now and not next time

Smoke any motherfucker that sweats me

Or any asshole that threatens me

I'm a sniper with a hell of a scope

Taking out a cop or two, they can't cope with me

With potential, to get bad as fuck

So I'ma turn it around

Put in my clip, yo, and this is the sound

But it all depends on the size of the gat

Taking out a police would make my day

But a nigga like Ren don't give a fuck to say

Yo man, what you need?

Eazy-E, won't you step up to the stand

And tell the jury how you feel about this bullshit?

I'm tired of the motherfucking jacking

Sweating my gang,
while I'm chilling in the shack, and

Shining the light in my face, and for what?

Maybe it's because I kick so much butt

I kick ass -- or maybe cause I blast

On a stupid-ass nigga
when I'm playing with the trigger

Of an Uzi or an AK

Cause the police always got something stupid to say

They put out my picture with silence

Cause my identity by itself causes violence

The E with the criminal behavior

Yeah, I'm a gangsta, but still I got flavor

Without a gun and a badge, what do ya got?

A sucker in a uniform waiting to get shot

By me, or another nigga

(MC Ren: Size don't mean shit,
he's from the old school fool)
And as you all know, E's here to rule

Whenever I'm rolling, keep looking in the mirror

Dumb motherfucker with a gun

That I take out, and then get away

While I'm driving off laughing this is what I'll say

The jury has found you guilty of being a redneck

Get him out of here!

Get him the fuck out my face!

Fuck you, you black motherfuckers!